It was big news and even front-page news in the Dutch media. Restaurant O&O in Sint Willebrord won their first Michelin star. Leading Asians experienced the full lunch experience and got welcomed by the warm Tsang Family to taste their exquisite Oriental Cuisine.

The restaurant opened their doors in 1982, when they first started carrying the Chinese cuisine just like many other Chinese restaurants in The Netherlands. Over time they realized that they wanted to cook more form their origins and that they want the Dutch guests to get acquainted with enormous rich tastes of other oriental cuisines such as Japanese, Malaysian and Singaporean. Travelling and tasting many different cuisines served as inspiration for their well-balanced fusion menu and signature O&O dishes.

Their amazing cooking got rewarded in 2003 with an entry in the Michelin Guide, after which the road to the culinary summit was continued with high marks in the leading restaurant guides Gault & Millau, Lekker500, Proefschrift Restaurants en Grootspraak.

This is followed by the following awards and guide markings:

As the first generation of Asian entrepreneurs who have built up a culinary highlight in the Netherlands, we are very proud of this big achievement. The Tsang Family has been able to convey the love of oriental cuisine and hospitality to their children, who continue the Tsang Dynasty in their own way. Son Mike is one of the creative minds in the kitchen, daughter Wendy as hostess and Monica is a solid value as a maître-sommelier. Together with the other team members they take care of your gastronomic oriental discovery trip in restaurant O&O. 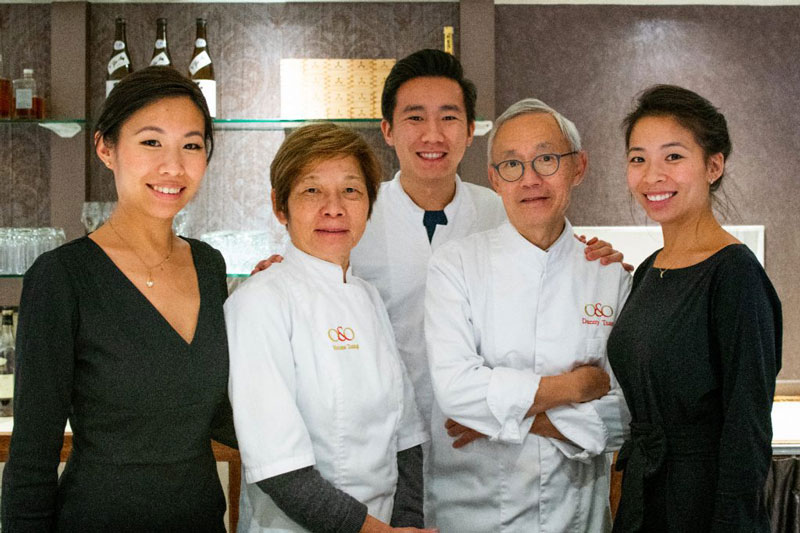