SIX DROPS TO A HEALTHY SKIN WITH COMBRAY

The book “A la Recherche du Temps Perdu” (In Search of Lost Time) of Marcel Proust is situated in his place of birth Combray in Normandy. The name of this village was the source of inspiration for the name of cosmetic brand “Combray”. Combray is developed by Dutch company Solenne and is based on the scientific invention of the antioxidant Oxofulleram. Oxofulleram works much stronger than Vitamin E does and is also more effective. It acts like a “free radical sponge”, it neutralizes harmful free radicals, many times more often than vitamin E does. It works in the cell wall of the skin cell so nothing of the effectiveness is lost.

What are the benefits of Oxofulleram?
• It protects skin against free radical damage and maintains the skin’s natural defense mechanism.
• It is a stable antioxidant which means that it does not evaporate in contact with oxygen.
• It does not become a free radical itself like other antioxidants.
• It ensures the fat layer, the skin’s protective barrier, to stay intact and prevents moisture loss.

Antioxidants are very important substances for maintaining a healthy and beautiful looking skin. The skin, our largest organ, secretes small amounts of sebum. This oily substance contains antioxidants and forms the protective layer of our skin. Combray’s philosophy is leaving the skin’s protective layer intact in order to protect the skin against free radical damage caused by environmental stress such as environmental pollution, sunlight and smoke.

What does Combray do for the skin?
Combray Facial Oil is a very effective natural moisturizer packed with antioxidants, which prevents skin aging. The skin’s natural protective barrier remains intact so it prevents the skin from loosing moisture which is one of the reasons skin ages faster. Regular use of Combray significantly reduces wrinkles and fine lines. The oil also works healing and calming on red, irritated or stressed skin. It improves the appearance of rosacea, eczema, psoriasis and acne. It soothes the skin after excessive exposure to sunlight or other conditions when skin is exposed to oxidative stress, such as cold, wind or after a chemical peel. All of these mentioned skin conditions have in common that they increase oxidative stress in the skin. Clinical and laboratory studies have shown that Combray works effectively against reducing oxidative stress in the skin.

How do you use Combray?
Apply approximately 6 drops of Combray to clean skin of face and neck and gently massage with the fingertips until the oil is completely absorbed by the skin. A relaxing facial massage does miracles. The amber color of Combray is due to the high level of Oxofulleram. This color immediately disappears after application. The Facial Oil is an all-in-one product and is all you need for a healthy glowing skin. Apply in the morning and in the evening. Using an oil feels differently from using a cream but once the skin is used to it, you see your skin improving day by day. The skin is looking healthy and wrinkles and pigmentation are visibly reduced. Combray is suitable for all skin types, even for oily skin. The oil blends perfectly into the skin.

Combray is a multi purpose oil:

Combray works well in various weather conditions: after long-term outdoor activities in the sun, in the cold or in the wind. It calms the skin immediately. Because Combray Facial Oil does not contain water, it’s your ultimate ally during winter sports, if you have spent your day on the slopes. It nourishes, protects and calms the skin. Combray is also highly recommend to use after the skin has been exposed to extreme stress such as after a chemical peeling or after cosmetic treatment. Combray does not contain a protection factor, so we recommend to apply a SPF over Combray when skin is exposed to sunlight. 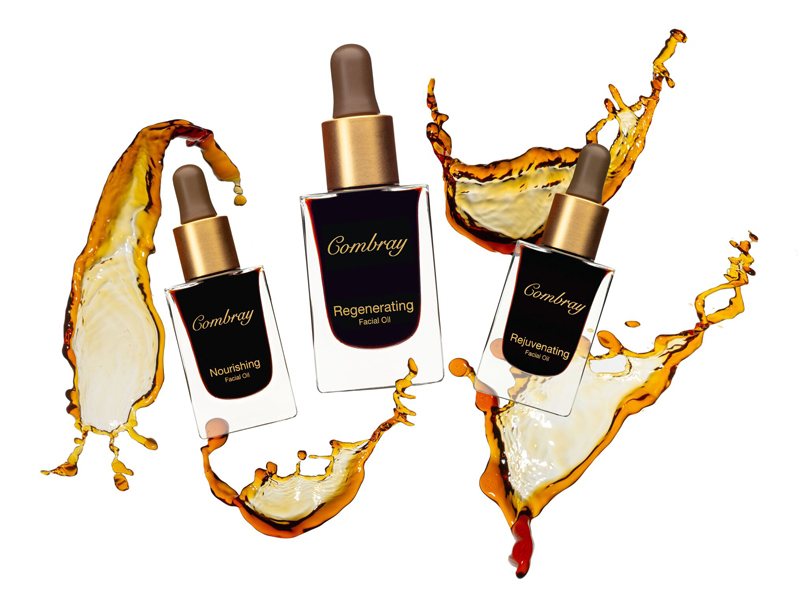